Skip to content
Home » Guides » Can You Eat Raw Pasta or Not? See The Risk Involved 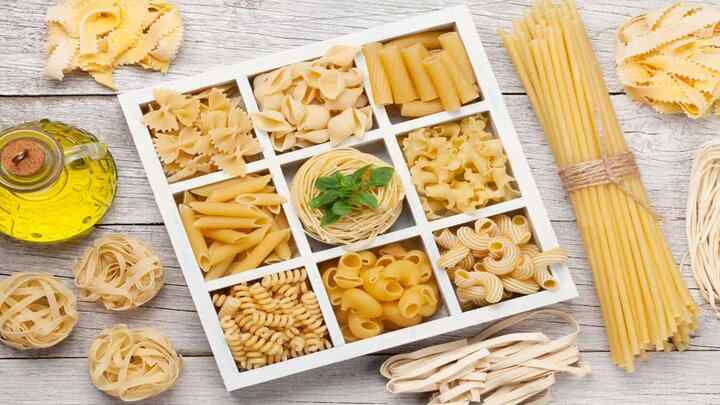 You’ve probably asked yourself this question: can you eat raw pasta? The answer is no, even though some people might tell you it’s okay to eat raw pasta.

If having good health is a concern to you, you should never eat raw pasta. The belief that you can’t eat raw pasta is a common misconception.

A lot of people eat lots of raw pasta. They think it’s healthy and good for them. But what about the risk of food poisoning? Well, that’s the purpose of this article.

In fact, a recent study from the Centers for Disease Control and Prevention stated that one in six Americans gets sick from food poisoning with those most susceptible being pregnant people, infants, children, teens, and older adults.

So if you’re still not sure whether it is safe or not to eat raw pasta, please read on to learn more about why you should never eat raw pasta.

Table of Contents show
What is Pasta?
What are the different types of Pasta?
Is it Safe to Eat Raw Pasta?
Why You Should Never Eat Raw Pasta
Can You Get Sick From Eating Uncooked Pasta?
Does Pasta Go Bad?
Is Pasta the same as Noodles?
FAQs
Conclusion: Is it Good to Eat Raw Pasta?

Pasta is a staple in many kitchens and is one of the most versatile foods on the planet. The ingredients (flour, water, and eggs) are combined into a dough and then rolled out flat before being cut into shapes. The dough is then cut into shapes and cooked until firm.

Pasta comes in different shapes (strands, sheets, or tubes.) and sizes, but there are two main types of pasta: dried and fresh. Pasta can be cooked quickly in boiling water or cooked more slowly in an oven until soft and tender.

SEE: Is Fried Rice Really Healthy for You?

What are the different types of Pasta?

This is the most common type of pasta and the one you’ll find at most grocery stores. Fresh pasta is made from durum wheat semolina flour, water, and egg. The dough is rolled out into sheets and then cut into shapes (usually fettuccine or lasagna noodles).

After cooking, fresh pasta must be eaten right away because it dries out quickly if left in a sealed plastic bag or container.

Dried pasta differs from fresh pasta in that it has been prepared using a different method of preparation, typically with less water content than fresh pasta, and does not contain eggs. They can be stored for up to 12 months in an airtight container in a cool dry place or freezer.

The most common types include spaghetti, rigatoni, linguine, and other shapes that are available at most grocery stores around the world.

Is it Safe to Eat Raw Pasta?

It is not safe to eat raw pasta. It can cause serious illness if you have certain food poisoning bacteria in your system.

Raw pasta is still considered unsafe even though it has been cooked. This is because there are still harmful bacteria that may be present in the raw pasta and could cause illness if eaten without cooking it first.

No doubt, many people eat raw pasta as a snack, but you should be aware of how much you consume and what types of food poisoning bacteria are present on your plate before eating any type of raw pasta.

SEE: Is It Safe To Eat Expired Bread – All You Need To Know

Why You Should Never Eat Raw Pasta

1. It’s tougher and takes way too long to digest

The idea of eating pasta raw might sound delicious, but it’s actually a pretty terrible idea. Raw pasta is much harder to digest than cooked pasta, and it can take more than 84 hours for the body to break down the carbs in raw pasta into glucose. This is not going to do you any favors if you’re trying to lose weight.

2. The texture is unappealing

3. It gets stuck between your teeth

Raw pasta doesn’t taste as good either — it’s mushy and bland compared to its cooked version. It’s also more difficult to chew than cooked pasta because it’s not as soft, so you end up with pieces of dough stuck between your teeth and gums.

4. You may be infected with salmonella bacteria

Raw foods often contain bacteria that can cause gastrointestinal illness and other conditions such as food poisoning, diarrhea, and vomiting among other things.

The most common symptom of salmonellosis is diarrhea, which is why it’s important to avoid raw foods like pasta that have not been cooked thoroughly enough to kill harmful bacteria like salmonella.

The major ingredients in pasta are flour, water, and sometimes egg whites for binding purposes. Flour is a staple food but not an essential nutrient. Uncooked pasta has no nutritional value as it’s made from flour and water only (sometimes no eggs). So what are you getting out of eating uncooked pasta?

SEE: Want to Recook Your Undercooked Chicken? – See How To Do It

Can You Get Sick From Eating Uncooked Pasta?

Generally, eating uncooked food can lead to food poisoning if it’s contaminated by harmful bacteria or viruses such as salmonella or E. coli. These bacteria can live on your hands without getting contaminated by other foods and then get into your mouth when you eat them.

So, by eating raw pasta whether dried or fresh, you’re exposing yourself and others to these harmful bacteria which could make you very sick or even kill you.

Pasta can go bad but unopened dry pasta is good in the pantry for two years from the time of purchase, while cooked pasta can last up to 5 days in the fridge.

If it’s dry pasta, there’s no need to refrigerate or freeze it, since it won’t extend its shelf-life. However, if your pasta is left out too long, it will start absorbing moisture from the air. This means that the pasta will become soft and sticky and lose its quality.

SEE: How Long You Should Keep Cooked Pasta in the Fridge

Is Pasta the same as Noodles?

While noodles and pasta are both made from wheat and water, they differ in size, shape, and consistency. Pasta is a long tube of dough that can be used in many ways. Noodles are similar to pasta in that they’re made from wheat, but they’re smaller and thinner than pasta.

Pasta is produced from hard durum wheat semolina or hard wheat flour. It is made by rolling the semolina into sheets and then cutting them into long strips called pasta shapes. The pasta dough is then rolled out, dried, and cut into the desired shape.

Noodles on the other hand are usually made with flour milled from common wheat and not the hard durum wheat semolina or wheat flour.

Can you eat raw pasta when pregnant?

Eating raw pasta when you’re pregnant is harmful to you and the baby. Even the cooked past must be eaten in moderate quantities and make sure it is homemade pasta. Avoid eating ready-made pasta available in stores as it is not healthy.

Can undercooked pasta give you diarrhea?

Pasta might sound like great food, but when it’s undercooked, it can bring on diarrhea and other symptoms of irritable bowel syndrome. Therefore, it’s important to make sure your pasta is properly cooked before serving it.

Can you eat raw tortellini?

Can raw pasta give you salmonella?

Yes because eggs are one of the major ingredients of raw pasta and have the chance to carry salmonella. So if you decide to eat raw pasta, that means you’re at risk of consuming salmonella bacteria.

Conclusion: Is it Good to Eat Raw Pasta?

When it comes to pasta, it is important to know that you should not eat raw pasta. You need to cook the pasta before consuming it. This will ensure that you get a great meal from your pasta and keep yourself safe from any kind of health problems or food poisoning.

When cooked properly, the pasta will look and taste like any other cooked dish. It will have the same texture and flavor as other foods that are cooked in a similar manner. This means that if you do not cook your pasta, then there is a chance that you might get food poisoning or even worse, a deadly disease like E. Coli infection.

If you do not want to take any chances with your health, then make sure that you always cook your pasta before eating it. You can also add some spices to your dish so that it tastes better when cooked and helps preserve nutrients in the food as well.

I hope you found this article helpful. You should also read about what to do with pasta leftovers in order to avoid food spoilage.