Skip to content
Home » Food » Does Evaporated Milk Go Bad? You Need to Read This 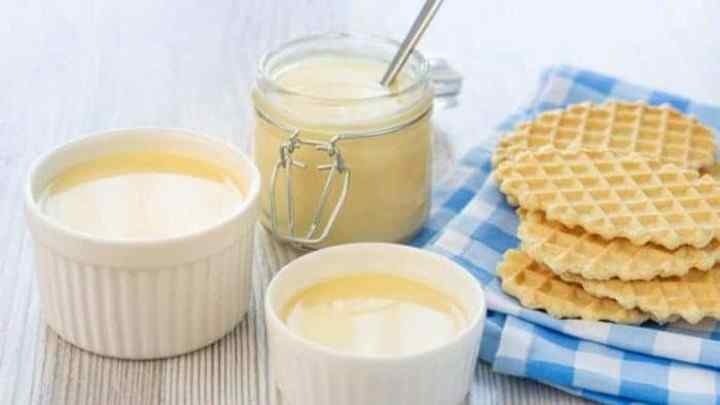 Evaporated milk is a creamy, thick product that has had half of its water content removed through evaporation. It’s often used to make candies since it doesn’t scorch as easily as regular milk.

But while evaporated milk is an excellent addition to your pantry, it can also be a source of confusion. Since it doesn’t have any added preservatives, you might find yourself wondering if it can go bad.

The answer is yes, evaporated milk does go bad. The good news, however, is that it can last for a long time after its “best by” date if you store it properly.

Let’s take a look at what evaporated milk is, its shelf life, and what to do to make it last longer and more.

What Is Evaporated Milk?

Evaporated milk is a product that’s made by slowly heating cow’s milk until around 60 percent of its water content has been removed. The result looks a lot like regular milk but has a slightly thicker consistency and a much longer shelf life.

You can use this type of milk in many recipes as a substitute for cream or fresh milk, and you can also eat it on its own. Because it’s more concentrated than fresh milk, evaporated milk has a slightly different flavor that’s similar to the taste of condensed milk.

You can find this milk on grocery store shelves in cans and shelf-stable cartons. Manufacturers have pasteurized both types to kill bacteria and slow down the spoilage process, so you can pick whichever one you like.

SEE: How to Tell If Sweetened Condensed Milk Has Gone Bad

The answer is yes. Evaporated milk is a shelf-stable product, but it does go bad. Most often, it goes bad because of improper storage or packaging.

If you store it correctly in its unopened container, evaporated milk can last for years. But once you open it, you have to store it in the fridge and use it within five days. You can also freeze this type of milk for about six months (though you may find that it lasts longer).

SEE: Here’s What You Should Know About the Shelf Life and Preservation of Oat Milk

What Is the Shelf Life of Evaporated Milk?

The shelf life of evaporated milk varies based on how it’s stored and whether or not it’s opened.

An unopened can or carton of evaporated milk will keep for about 1 year past its best-by date. The best-by date indicates how long the milk will remain at peak quality. After this point, there may be some slight changes in its flavor.

To extend the shelf life of unopened evaporated milk, store it in a cool place away from sunlight and moisture, such as in a pantry or cabinet.

Can You Drink Expired Evaporated Milk?

Yes, you can. Expired evaporated milk is still safe to drink if it hasn’t shown any signs of spoilage.

However, it may not taste as good as fresh milk. In most cases, expired products tend to change their flavor and lose some of their nutritional value over time.

How to Tell If Evaporated Milk Is Bad

If the milk smells sour or rancid, throw it out. You shouldn’t be able to smell anything unusual about your milk — if you can, it’s time to get rid of it.

The color of your milk should be creamy-white with a slight golden tinge. If you see any discoloration, discard it.

Discard any container with a bulging lid or broken seal, as this could mean that the content is contaminated with bacteria or other microorganisms that may cause illness if consumed.

Do the water test

You can tell if your milk has gone bad by putting a small amount in a glass with water. If it separates and forms white curds on top, that’s a good indication that it’s spoiled.

If there are moldy spots on your milk, then throw it away immediately, as this indicates that harmful bacteria have started growing in it.

If there are clumps at the bottom of the container, then your milk is no longer safe to drink. Also, if any visible particles are floating on your milk, don’t drink it. This means your milk has been contaminated and you can get sick by consuming it.

You might be surprised at how easy this one is — simply take a sip of the milk and see if it tastes okay to you. It should taste sweet and good, but if not, throw away whatever remains in the container immediately.

SEE: Food Storage Mistakes You Should Avoid From Now

How to Preserve Evaporated Milk

Store in a cool dry place

It is best to store your milk in a cool, dry place away from direct sunlight and heat sources. Exposure to heat or direct sunlight may cause it to spoil faster than normal.

Store it in the refrigerator

If you want your milk to last longer, then you can put it in the refrigerator (at 40 degrees Fahrenheit or lower). This way, you will also be able to use only as much as you need and save the rest of the milk for later use.

You can refrigerate milk in its original container or transfer it into an airtight container before refrigerating it. Do not store it in glass or plastic containers because they are not airtight and could allow bacteria to grow inside them as they sit in your refrigerator.

Store it in the freezer

To keep your milk for an extended period (about 6 months after opening), you’ll need to put it in the freezer. The best way to do this is by filling up ice cube trays with the milk and then putting them in your freezer so that they are ready when you need them later.

You can also pour the milk into freezer containers, leaving about 1/2-inch headspace. But be sure to mark the containers with the date you store them so you know how old they are when you use them.

To use frozen milk in recipes, just thaw it in the refrigerator. However, avoid refreezing thawed milk because this will increase the risk of bacterial growth and cause food poisoning if consumed.

Can you use evaporated milk as a substitute for fresh milk in recipes?

Yes, you can. Evaporated milk is a good substitute for fresh milk and other dairy products in many recipes, including puddings, pie fillings, cakes, and cookies.

Evaporated milk is more concentrated than fresh milk, so you should use less in recipes to achieve the same effect as fresh milk.

What is the difference between condensed milk and evaporated milk?

Is evaporated milk good for babies?

Yes, it is. Evaporated milk is a great addition to baby foods because it has a high amount of minerals and vitamins. It also has more protein than regular milk, which helps build strong bones and muscles in babies and toddlers.

Can you add evaporated milk to smoothies?

Yes, you can. Evaporated milk is a great way to add some extra protein and a creamy texture to your smoothie.

You may also want to add some other ingredients to your smoothies when using this milk. Some people add cocoa powder or chocolate syrup for an extra chocolatey taste and a thicker consistency. Others add oats for added fiber and protein.

What kind of food can you make with evaporated milk?

Any kind of food. Evaporated milk is a great addition to all recipes because it adds creaminess and extra protein. You can use it as an alternative to regular milk or yogurt in any recipe that calls for one of those ingredients.

As with any product, evaporated milk does go bad. If unopened this kind of milk will keep for months or even years past its best-by date if you store it properly.

Once you open it, however, you should use it within 24 hours or store it in the refrigerator or freezer to make it last longer.

To know more about the shelf life of all kinds of milk, visit Cheffist today.