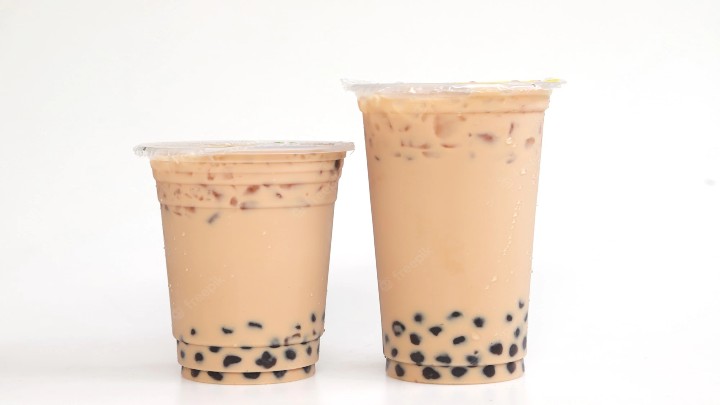 Milk tea tastes just as its name suggests, like tea mixed with a lot of milk. This gives it a taste that ranges from very creamy and sweet to slightly sweet depending on the type of ingredients being used.

There are numerous variations of milk tea so an actual description would be difficult to give. However, they mostly have something in common, the use of tea leaves like green or black tea as the base ingredient. Common examples include masala chai tea and taro milk tea.

Various types of milk tea are described in this article, along with their tastes and ingredients.

What is milk tea?

Milk tea refers to various beverages with origins from all over the world that make use of tea leaves and milk as their base ingredient. In its most basic form, milk tea consists of tea (black, green, or herbal) and milk in it.

However, depending on the region where it originates from, other ingredients go into making them. These additional ingredients may include sweeteners (sugar or honey), spices (cardamom, cinnamon), and flavorings (chocolate, vanilla, or strawberry).

Some milk teas also add tapioca pearls to make it thick and chewy. Milk teas are usually rich in taste in order to mask the astringent taste of the tea, and give it a more pleasant dessert-styled taste.

What are the types of milk tea?

Below are some of the most common types of milk tea and the ingredients that go into making them.

Thai tea is a variant of milk tea that consists of a strong black tea as the base, mixed with condensed milk, and tapioca pearls (optional).

The black tea used as the base of Thai tea is either Assam or Ceylon. Common ingredients used in making Thai tea may include orange, star anise, tamarind, lime, blossoms, mint, and other spices.

Originating from Hong Kong, the Hong Kong-style milk tea started as a result of the common afternoon tea with milk and sugar practice under British colonial rule.

Ceylon is the preferred black tea used to make Hong Kong-style tea. However, other teas like Pu-erh may sometimes be used in making them.

Also known as pearl tea or bubble milk tea, boba tea is a special variant of milk tea made with tapioca pearls that originated in Taiwan. Although it can be made without the use of milk, boba tea often contains condensed or evaporated milk.

These unique flavors and variants and the use of milk and tapioca pearls give the boba tea a sweet and creamy taste.

Although the boba milk tea possesses a sweet taste, this sweetness is not excessive as the taste of the tea blends with the numerous flavors and creamy taste.

Featuring a green tea base and topped with a foamy layer of cream, the Panda milk tea gets its unique name from the mixture of black and white tapioca pearls used to decorate it.

Although green tea is commonly used as the base in Panda milk teas, black tea can also be used.

Similar to Gong Cha in taste, the Panda milk tea makes use of brown sugar or sweeteners, cream/milk, and black and white tapioca pearls to give it its unique taste.

The Hokkaido milk tea is another variation of milk tea that originated in Japan. Major ingredients used in making this tea include fatty Hokkaido milk and premium black tea.

Due to the fat content and richness of the Hokkaido milk, the milk tea possesses a smooth, thick and creamy texture that blends perfectly with the black tea.

Also from Japan, the Okinawa milk tea features a black tea base perfectly mixed with Okinawa brown sugar and milk.

Originating from India, this spice-rich tea has grown in popularity and can sometimes be made from syrups or powder.

SEE: What The Masala Chai Tastes Like And How To Make Yours

Originating from Taiwan, the Taro milk tea is a form of bubble milk tea that does not need conventional tea as a base.

While black, green, or herbal tea can be added to the mix, the base ingredient for the taro milk tea is the taro root.

You can either make the taro milk tea with blended taro root or purchase the prepacked taro root powder. Other ingredients used in making it include tapioca balls (optional), milk, sugar, or sweeteners.

What milk tea has no caffeine?

With the exception of taro milk tea, most of these teas contain caffeine due to the presence of black or green tea in it. The reason for the lack of caffeine in taro milk tea is that it is made with a root and not tea leaves.

Also, if you need to avoid caffeine when making your milk tea, you can substitute the black or green tea with herbal teas like peppermint, ginger, or chamomile which have no caffeine content.

Unlike most caffeinated teas, these teas do not come from the Camellia Sinensis plant. Also, as far as caffeine content goes, black tea has more than green tea.

SEE: How To Make The Taro Milk Tea At Home

Are milk tea and bubble tea the same?

No, milk tea and bubble tea are almost the same things with the exception of some unique differences.

The difference between milk tea and bubble tea is the addition of chewy tapioca pearls to the tea base, while milk tea contains just milk, sweeteners, and spices.

Also, bubble tea makes use of a wide range of flavors such as strawberry, mango, honeydew, or passionfruit to add to its taste.

Are milk tea pearls bad for you?

No, tapioca pearls used in tea are not bad or harmful to your health. These balls consist of pure starch and not too many nutrients. So while they pose no danger to your health, they also do not offer you any significant health benefits.

It is however very helpful to those who are sensitive to gluten as it is gluten-free and would not cause adverse reactions.

Yes, excess consumption of milk tea can lead to weight gain. This depends on how many calories and fat exist in it.

Most milk teas are loaded with calories as they contain sugar and milk, in addition to caffeine.

Can milk tea cause constipation?

Yes, milk tea can result in constipation due to the presence of a chemical called theophylline found in black tea.

Why is milk tea not good for your health?

When consumed daily, milk teas pose significant health risks due to their high sugar and calorie content. The consumption of milk tea in excess can have adverse effects on one’s health.These conditions include obesity, type 2 diabetes, liver issues, and heart disease.

No, traditionally made milk teas are not vegan-friendly as they make use of dairy products. You can however customize your milk tea to use vegan-friendly non-dairy milk.

Milk tea is a complicated beverage—particularly if you are one of those who like its sweet taste. However, if you can learn the different variants of milk tea, and learn to make the ones that meet your sweet needs, you will find happiness with every sip.

Finally, If you love milk tea but you’re still searching for the perfect combination of flavor and sweetness, you may be in luck. I recommend you find out why panda milk tea is so unique and how to make it at home.